The Nocturnals is a critically acclaimed middle grade chapter book series following three unlikely friends—Dawn, a serious fox, Tobin, a sweet pangolin, and Bismark, a pint-sized sugar glider. Discover the friendships, teamwork, and humor as the Nocturnal Brigade solves the unpredictable mysteries of the night.

The adventure continues in The Hidden Kingdom, the fourth book of The Nocturnals series by Tracey Hecht. When Dawn, Tobin, and Bismark travel to a distant watering hole, the ground swirls, bark jumps off trees, and tumbleweeds chase after them. Is the forest suddenly alive? Only the Nocturnals can solve the mystery and unite the forest! 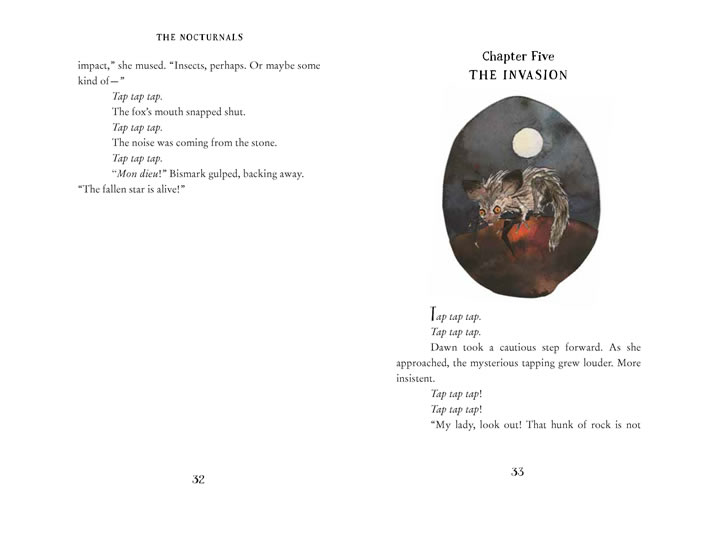 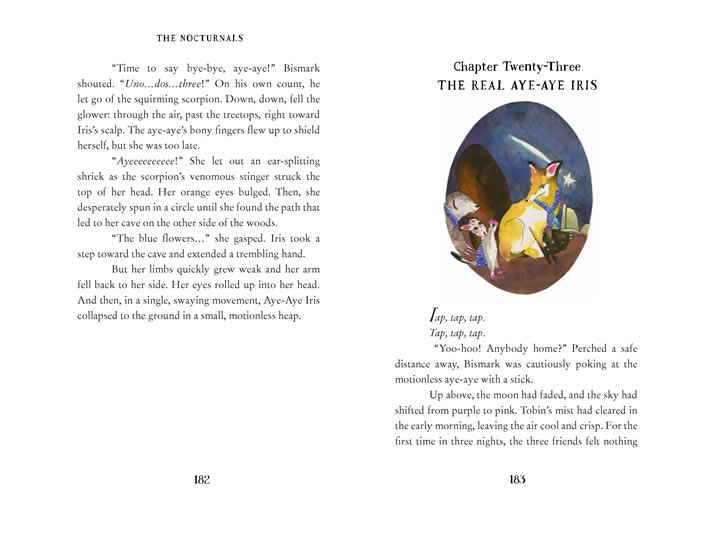 What People are Saying

"Hecht serves up both a curious adventure and interesting zoological facts in this volume. Her descriptions of flora, fauna, and natural phenomena are vivid and immediate. The multilingual and loquacious Bismark fuels a few good laughs; Tobin balances his clumsiness with limitless kindness; and brave Dawn keeps the crew focused on their mission. Likewise, the villains of the story display great depth of character. They remind readers that many times bad deeds arise from pain and mistreatment in the past. Fresh and fun: the brigade delights as it explores another forest mystery."
—Kirkus Reviews

"The third installment in this popular series has our stalwart Nocturnals Brigade attempting to find an anecdote for poisoned pomelo melons…Our heroes hold fast to their established personas: Dawn is the wise and mysterious fox; Bismark is the vainglorious sugar glider who manages to rise to even greater levels of lovable obnoxiousness, and sweet Tobin is the plodding pangolin, whose heroics involve a skunklike spray he emits when threatened…Action abounds, and almost all of the short chapters end on cliff-hangers. Once again, the trio’s mutual loyalty and dependence on each other’s unique talents—be they what they are—save the day. This is a worthy addition to the franchise."
—Booklist

"Hecht knows her audience and has written a well-paced story with short chapters that keep readers hanging on to the end. The Fallen Star contains a semi-covert lesson in kindness and accepting others for who they are. The unlikely alliance of the Brigade members, animals who come from disparate ecosystems, offers an example of unique individuals forming strong friendships."
—Deseret News, Utah

"Readers who enjoy animal adventures such as The Guardians of Ga'Hoole may have a new series to add to their bookshelves. The Fallen Star is the third book in the series featuring the Nocturnal Brigade. The friends in the brigade have the same quirks from their other books that will make readers laugh, from Bismarck's over the top declarations of love for Dawn to Tobin's loudly grumbling stomach. There is a website for readers and educators with plenty of resources"
—Suzanne Costner, Library Media Specialist and Blogger, Fairview Elementary School and The Fairview Review

"As with her previous two books in the series, The Mysterious Abductions and The Ominous Eye, Hecht does her best to weave science facts, literary conventions, and a rich moral foundation into The Fallen Star. Readers learn not only the names of animals, but curious facts and oddities about them as well. Hecht also includes alliteration and vocabulary in her Nocturnals series. As is always the case in The Nocturnals, messages of kindness and forgiveness are pervasive in The Fallen Star"
—Jaclyn Bauer, Teacher and Blogger, Centered on Books, Englewood, CO

"The lovable group of Nocturnal sleuths is back in their third adventure, this time with high stakes…Sweet, gentle Tobin is the source of possibly the greatest fart joke in the history of children's literature, giving readers much-needed comic relief throughout the white knuckle moments The Fallen Star is filled with. Teamwork, friendship, and determination sees the friends through this latest adventure, and there's a lovely message about tolerance that is especially important reading. Things have started taking off for Nocturnals since the first book published last year!"
—Rosemary Kiladitis, Librarian and Blogger, Queens Library, NY, Mom Read It Blog

Goodreads reviews for The Fallen Star